Rep. Lois Capps, D-Santa Barbara, will commemorate the first anniversary of the signing of the federal health-care law on Wednesday with birthday cake and a roundtable discussion with Santa Barbara families from 3 p.m. to 4 p.m. Wednesday, March 23 at Shoreline Park.

Capps will talk specifically about how the health-care law has benefited children and families in its first year of implementation, focusing on the implementation of the Patient’s Bill of Rights, which banned lifetime limits on coverage and discrimination against children with pre-existing conditions.

Capps also will moderate a roundtable discussion with parents to hear their stories and feedback about what families are most concerned about when it comes to health care.

Included in the roundtable discussion will be Bill and Victoria Strong, founders of the Gwendolyn Strong Foundation, a nonprofit focused on spinal muscular atrophy named for their daughter. 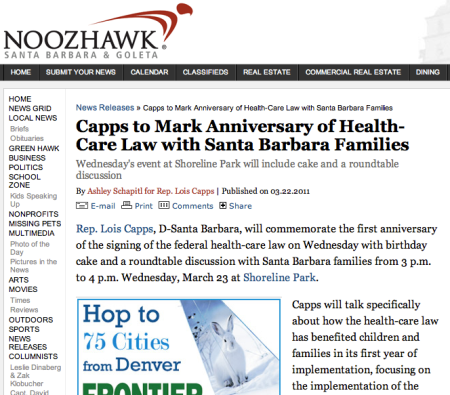 This entry was posted on Wednesday, March 23rd, 2011 at 7:33 AM and is filed under Advocacy, California, Gwendolyn Strong Foundation, Health Insurance, Legislation, United States. You can follow any responses to this entry through the RSS 2.0 feed. You can leave a response, or trackback from your own site.