The Story of a Family Saved by Obamacare

The Story of a Family Saved by Obamacare

PHOENIX – This week marks the one year anniversary of the Affordable Care Act, known by many as Obamacare. We talked to a family in the valley who has reaped a benefit from this law, which has had a polarizing effect on the country.

Lauren Byrd and twin brother Kyle are, in many ways, just your typical preschoolers. Cute, curious and full of energy — except they have a rare, and expensive condition.

“They can’t spend their energy going through the sandbox on their own, they are stuck sort of sitting around observing the world, that’s where they get all their charm from,” says mom Cassandra Byrd.

Spinal muscular atrophy is the disability that makes life a little more difficult for Chris and Cassandra, and the financial costs of this condition can be astronomical. 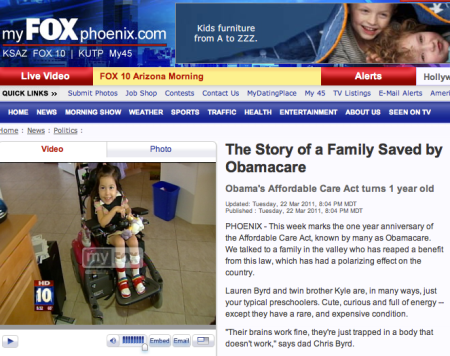 This entry was posted on Wednesday, March 23rd, 2011 at 7:22 AM and is filed under Advocacy, Arizona, Health Insurance, Legislation, United States. You can follow any responses to this entry through the RSS 2.0 feed. You can leave a response, or trackback from your own site.