A new do-it-yourself DNA kit, set to be launched by an Australian company, will allow couples to find out if they could pass on a genetic disease to a baby.

In January, Sydney-based company Lumigenix, with laboratories in Melbourne and Los Angeles, began offering direct-to-consumer genetic testing of the risk of developing cancers, heart disease, type 2 diabetes and other diseases.

It will release a pre-conception testing kit in six months, allowing expecting and prospective parents to find out if they possess genes that make them carriers of about 250 recessive genetic diseases, including cystic fibrosis, spinal muscular atrophy, Tay-Sachs disease and Bloom syndrome. 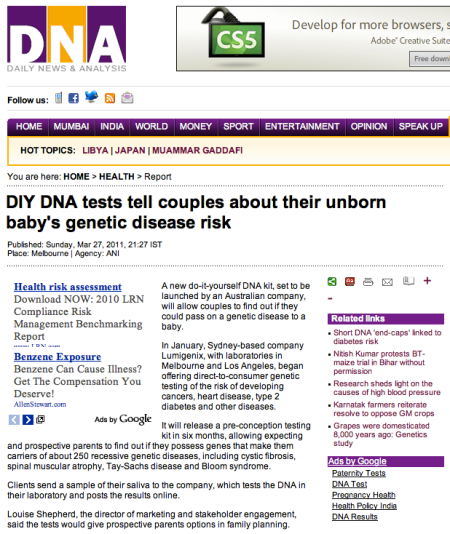 This entry was posted on Monday, March 28th, 2011 at 8:24 AM and is filed under Australia, Carrier Screening, Press Release. You can follow any responses to this entry through the RSS 2.0 feed. You can leave a response, or trackback from your own site.