Spinal muscular atrophy is the number one genetic killer for babies, and yet there is no cure or treatment.

In fact, when children under the age of two are diagnosed, their parents are often told to take them home and love them for as long as they have them.

That’s not good enough for a group, now based in Chilliwack, fighting for both treatment and cure.

Families of SMA Canada, which were previously based in Manitoba, moved to Chilliwack when Susi Vander Wyk, a longtime board member, took on the non-profit organization’s presidency role.

Vander Wyk, whose 14-year-old daughter has SMA, is determined to increase the organization’s support for children, parents and families with SMA. 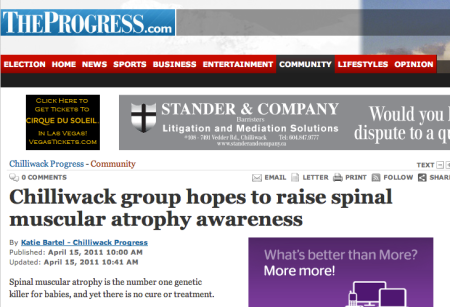 This entry was posted on Sunday, April 17th, 2011 at 7:31 AM and is filed under Awareness, Canada, FSMA. You can follow any responses to this entry through the RSS 2.0 feed. You can leave a response, or trackback from your own site.