AN AUTHOR has drawn on his own experiences of growing up in the 1970s to pen his second novel.

Children of the Resolution, by Eston writer Gary William Murning, explores, within the context of a unique coming-of-age story, the development of integrated education for children with disabilities.

And that’s something Gary knows plenty about for, having been born in Guisborough in 1966 with a form of spinal muscular atrophy, he spent some of his early years at schools for children with physical disabilities before going into mainstream education. 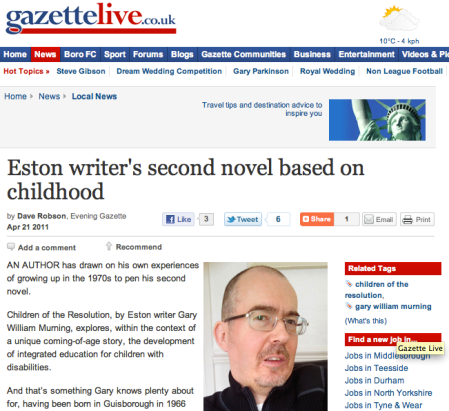 This entry was posted on Thursday, April 21st, 2011 at 7:27 AM and is filed under Advocacy, Inspiration, United Kingdom. You can follow any responses to this entry through the RSS 2.0 feed. You can leave a response, or trackback from your own site.