When Danny was just 5 ½ months old, his parents knew something was wrong. Danny wasn’t sitting up like other babies, and when he was put into a sitting position, he would flop right over.

Danny’s parents, Mary and Joe, took him to a neurologist, and after five minutes were told that he had Spinal Muscular Atrophy (SMA), Stage II, and to take him home and enjoy him while they could. They were told Danny was what doctors termed a “weak type II” because he did eventually sit with assistance as a baby.

They got the devastating news no parents want to hear—it was terminal. They were told their Danny had three to six months to live, and they should make sure to get him baptized. 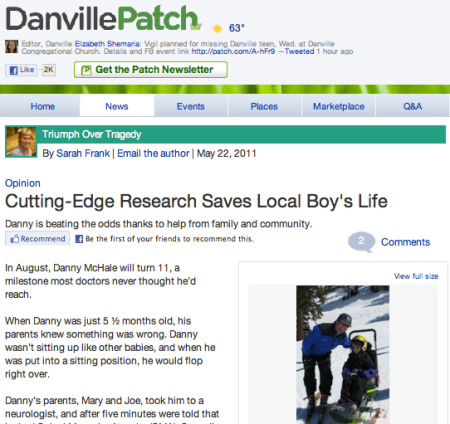 This entry was posted on Tuesday, May 24th, 2011 at 12:48 PM and is filed under California, Clinical Trial, FSMA, Fundraiser, Research, United States. You can follow any responses to this entry through the RSS 2.0 feed. You can leave a response, or trackback from your own site.