About 200 people were arrested and taken to jail in Bowling Green on Wednesday, but all were back on the streets by late afternoon. The arrestees were even treated to a meal and thanked for their visit during their incarceration.

Of course, this wasn’t an ordinary jail and the prisoners were far from criminals. Instead, area business and community leaders willing to help out a good cause went behind bars Wednesday to benefit the Muscular Dystrophy Association.

During the MDA lockup, the “jailbirds” were arrested and brought to the L&N Depot, where they were booked and “sentenced to raising money,” said Amanda Spiehler, executive director MDA of Middle Tennessee and Southern Kentucky.

“I’m being falsely accused,” joked Robert Dean, chief of police at Western Kentucky University, as he sat with other arrestees making calls to get donations. Dean then admitted that he knew he was going to be arrested that day. 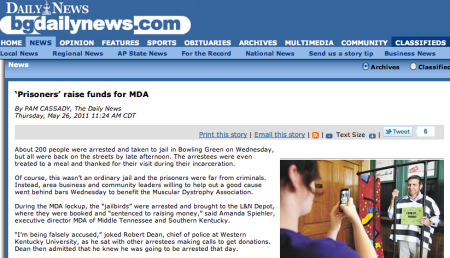 This entry was posted on Thursday, May 26th, 2011 at 11:30 AM and is filed under Fundraiser, Kentucky, MDA, United States. You can follow any responses to this entry through the RSS 2.0 feed. You can leave a response, or trackback from your own site.