Rockville Centre resident Debbie Cuevas was recently honored as one of the state Senate’s 2011 women of distinction. She joined other notable women at a reception on May 24 in the State Capitol building. Created in 1998, the Women of Distinction program honors outstanding women from across New York state who exemplify personal excellence, or whose professional achievements or acts of courage, selfless integrity or perseverance serve as an example to all New Yorkers.

“I am proud to honor Rockville Centre’s Debbie Cuevas as my 2011 Woman of Distinction,” said Senator Majority Leader Dean Skelos in a written statement. “Ms. Cuevas is mother, friend, nurse, caregiver, physical therapist, [spinal muscular atrophy] activist, and much more rolled into one. A true pioneer, Ms. Cuevas founded the Greater New York Chapter of Families of SMA in 2006, as a way to give back to her community. As [its] president [she] is instrumental in serving over 500 families who have been affected by Spinal Muscular Atrophy and continues to make a positive difference in the lives of others every day.” 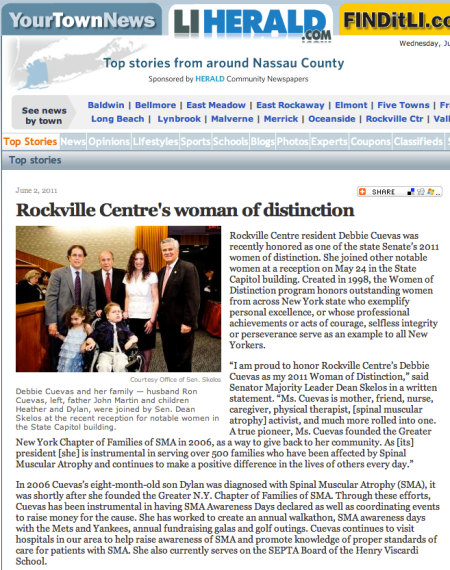 This entry was posted on Wednesday, June 1st, 2011 at 4:17 PM and is filed under Advocacy, Awareness, FSMA, Inspiration, New York, United States. You can follow any responses to this entry through the RSS 2.0 feed. You can leave a response, or trackback from your own site.