Kerry Benincasa lost her van on the backroads of the West End.

At a stop sign along Route 903, her brakes weren’t responding. As she coasted to a stop and put the vehicle in park, smoke billowed from under the hood.

“Jump out of the car as soon as Mommy stops,” she told her 5-year-old daughter Cecelia.

The two escaped unscathed. The same can’t be said about the family vehicle: A brake line needs replacing.

But Benincasa of Albrightsville is more thankful than upset. She considers the whole ordeal an act of God.

“If it didn’t happen yesterday, it would’ve happened today, while we were traveling on I-80 with Michael in the car,” she said.

Michael is Benincasa’s soon-to-be 4-year-old son. He was born with Type 1 Spinal Muscular Atrophy, a condition that has rendered him quadriplegic and unable to breathe without assistance.

Had he been in the van — a 1986 Chevrolet outfitted with a wheelchair lift — Michael would’ve been strapped in and difficult to move.

“He’s completely flaccid; he can’t even lift his head up,” Benincasa said.

Outside the van, Michael would still not have been safe. Without his bulky portable ventilator, he would have been unable to breathe. 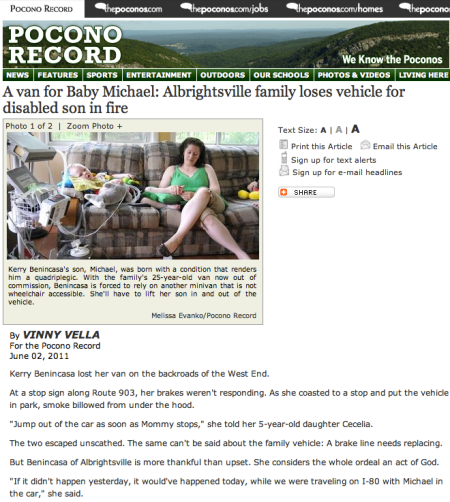 This entry was posted on Friday, June 3rd, 2011 at 3:16 PM and is filed under Fundraiser, Pennsylvania, United States. You can follow any responses to this entry through the RSS 2.0 feed. You can leave a response, or trackback from your own site.