Until recently, most researchers thought that problems with spinal muscular atrophy (SMA) began exclusively in motor neurons, the cells that transmit signals from the spinal cord to muscles telling them to move. But a new study, led by George Mentis, Ph.D., an investigator at Columbia University in New York City, may change that view. His results, published in Neuron,* suggest for the first time that SMA may also affect sensory neurons, the cells that transmit movements and sensations to the spinal cord.

“It changes the way we think about SMA”, said Kenneth Fischbeck, M.D., chief of the Neurogenetics Branch at the National Institute of Neurological Disorders and Stroke (NINDS) in Bethesda, Maryland. 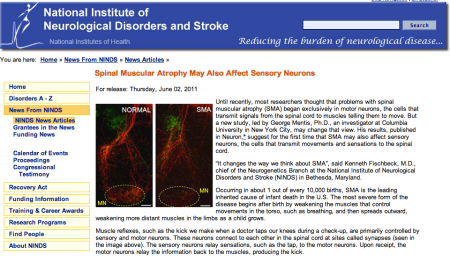 This entry was posted on Monday, June 13th, 2011 at 11:39 AM and is filed under Press Release, Research, United States. You can follow any responses to this entry through the RSS 2.0 feed. You can leave a response, or trackback from your own site.