Despite losing use of arms, CSULA student achieves bachelor’s degree in graphic design

Despite losing use of arms, CSULA student achieves bachelor’s degree in graphic design

Alhambra resident Todd Tostado, who lost the use of his arms at age 14 as a result of spinal muscular atrophy, received his bachelor’s degree in art at Cal State Los Angeles this past weekend.

Tostado, who also has been using a ventilator since he was nine due to chronic respiratory failure, enjoyed drawing as a child, but eventually could not use his hands to draw due to the neuromuscular disease that progressively weakened his muscles. His parents bought him his first computer during his senior year at Alhambra High School, and there he began his quest to express himself creatively. With assistive technology, he was able to design and create art digitally.

After graduating from high school, he took art classes at Pasadena City College, then went on to pursue a baccalaureate degree in graphic design at CSULA. 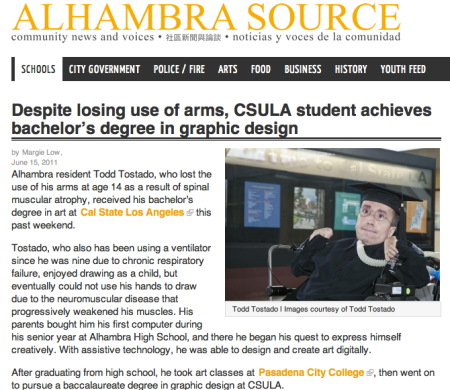 This entry was posted on Wednesday, June 15th, 2011 at 3:50 PM and is filed under California, Education, Inspiration, United States. You can follow any responses to this entry through the RSS 2.0 feed. You can leave a response, or trackback from your own site.