When the long-awaited Human Genome Project succeeded in 2003, mapping all the DNA, genes and chromosomes that operate the human body, it was hailed as a medical miracle, compared in scientific significance to the Apollo moon landings.

But the glow quickly faded. Progress has been slower and setbacks greater than expected, prompting some to say the whole idea is overblown, and research dollars could be better spent on other ways of fighting disease.

That’s about to change.

Researchers in South Florida and across the nation now are working on advances they say could soon create an explosion of new ways to prevent, detect, treat and someday even cure scores of intractable diseases. 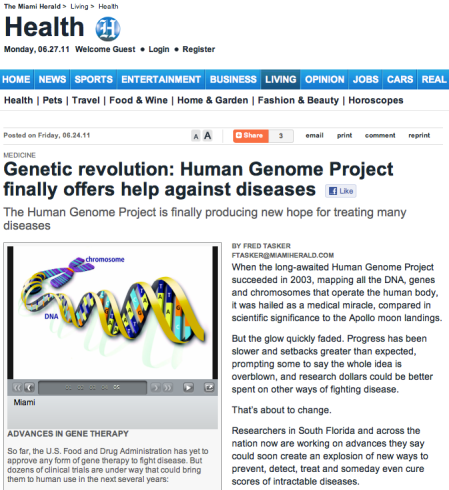 This entry was posted on Monday, June 27th, 2011 at 10:57 AM and is filed under Florida, Research, United States. You can follow any responses to this entry through the RSS 2.0 feed. You can leave a response, or trackback from your own site.