Understanding genetic disorders like cystic fibrosis could be easier after researchers at a B.C. university made a breakthrough in gene splicing.

Stephen Rader, a chemistry professor at the University of Northern British Columbia, said researchers have discovered that an RNA molecule previously thought to play no role in gene splicing is, in fact, essential.

Researchers have also discovered a new way to study what the U4 molecule does, a problem Prof. Rader said scientists have grappled with for about three decades.

“Splicing is so important in our bodies that if anything goes wrong with it, it causes various kinds of disease, including cystic fibrosis and a whole slew of others. The idea then is that what we learn about how splicing happens normally will help us to understand what goes wrong in these diseases,” he said in an interview. 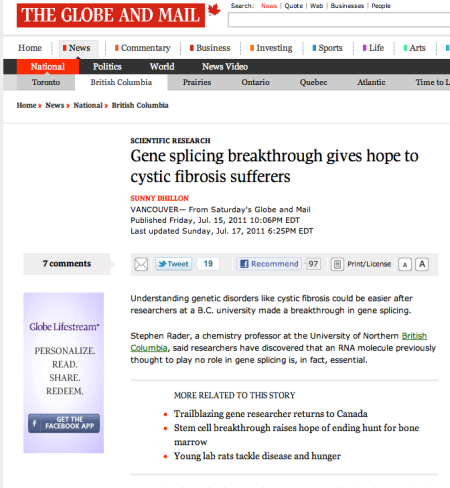 This entry was posted on Monday, July 18th, 2011 at 8:33 AM and is filed under Canada, Research. You can follow any responses to this entry through the RSS 2.0 feed. You can leave a response, or trackback from your own site.