A little lemonade for a little boy

A little lemonade for a little boy

PRINCETON — Costumed children dancing down the sidewalk turned a lemonade stand into a lively fundraiser last week in Princeton.

Family and friends of Nolan Shofner, 8, of Princeton hosted the week-long fundraiser to raise money for research into Spinal Muscular Atrophy (SMA), a disease Nolan was diagnosed with when he was just 4 months old.

Nolan and his older brother, Blake, and a group of about 10 friends and family members helped to greet visitors at the lemonade stand each day, set up in front of his house on Elm Place. To attract the attention of passersby, the young people wore a variety of costumes, skateboarded down the sidewalk, put on impromptu dances, and waved people over to the stand. 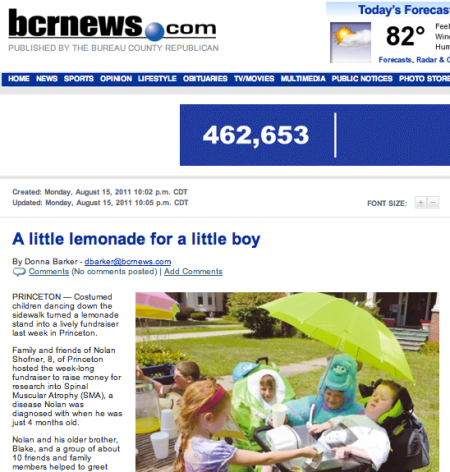 This entry was posted on Tuesday, August 16th, 2011 at 11:35 AM and is filed under Awareness, Fundraiser, New Jersey, United States. You can follow any responses to this entry through the RSS 2.0 feed. You can leave a response, or trackback from your own site.