SPINAL Muscular Atrophy (SMA) Awareness Month was a massive success in Narooma and honoured the memory of the beautiful Summer Carol Lynn Hayes.
This is according to Summer’s mother Tamara Hayes, who is driven by the memory of her daughter who died from SMA earlier this year.

There is still time to help out by booking a table at the upcoming charity night at the Narooma Golf Club as there are plenty of spaces available.

The former Narooma resident now works for the Spinal Muscular Atrophy Association of Australia in Canberra.

Proof of campaign’s success is her belief that Narooma and surrounds are now aware that SMA is the number 1 genetic killer of infants under the age of 2.

One in 35 of us carry the gene, and if two people carrying this gene together have a baby there is a one in four chance that the baby will suffer from SMA.

And 80 per cent of babies with SMA have Type 1, for which there is no cure and means they will not live to see their second birthday.

Babies born with Type 2 or 3, will need around the clock assistance for their whole lives and life expectancy will be reduced due to age of symptoms onset.

Awareness of SMA was given a boost in Canberra recently when Steve Doszpot, a local Liberal, gave a speech in the Legislative Assembly highlighting the effects of SMA on both children, and the families and friends who support them.

“He acknowledged the tragedy that had befallen my family when we lost Summer, earlier this year and he offered to help with any future fundraising activities and awareness programs that would be held in order to further spread an understanding of this killer disease throughout the community,” she said. 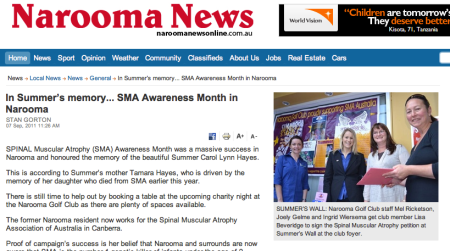 This entry was posted on Thursday, September 8th, 2011 at 12:29 PM and is filed under Australia, Awareness, Tribute. You can follow any responses to this entry through the RSS 2.0 feed. You can leave a response, or trackback from your own site.