iPierian, the South San Francisco-based developer of stem cell technology co-founded by top scientists at Harvard University, said today it has hired a new CEO. Nancy Stagliano, the co-founder and former CEO of South San Francisco-based CytomX Therapeutics, has taken the top job at iPierian, while interim CEO Peter Van Vlasselaer has moved aside to become the executive chairman of the board.

The company has been quiet since May, when Xconomy broke the news that the iPierian’s board terminated CEO Mike Venuti and most of the senior management team. A few weeks later, board chairman Corey Goodman resigned in the wake of the company’s shift in strategy. Today’s statement from iPierian says that Van Vlasselaer, the interim CEO, has prioritized the company’s efforts over the past several months toward using its stem cell technology to help discover drugs for neurodegenerative disorders like Alzheimer’s, amyotrophic lateral sclerosis (ALS), and spinal muscular atrophy. 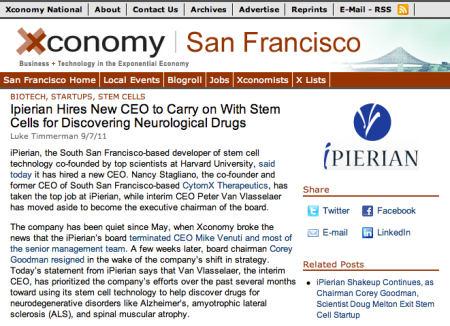 This entry was posted on Thursday, September 8th, 2011 at 12:33 PM and is filed under California, Research, United States. You can follow any responses to this entry through the RSS 2.0 feed. You can leave a response, or trackback from your own site.