Fulton man’s memoir demonstrates the power of a fighting spirit

Fulton man’s memoir demonstrates the power of a fighting spirit

Craig Abbott’s autobiography begins at what could have been the end: He was dying.

At 18, one of his hundreds of cases of pneumonia turned into something worse. An ambulance was called when Abbott had difficulty breathing, made more difficult by his spinal muscular atrophy type 1, a disease that can weaken the muscles used for breathing and coughing.

On the drive to the hospital, the cough assist machine in the ambulance that would clear his lungs to improve his breathing wasn’t working. He passed out while the ambulance staff used a manual respirator to breathe for him. He came back to consciousness 13 hours later, hooked up to another breathing machine.

Abbott, now 23, of Fulton, said he opened his book “Classified Terminally Ill: A Young Man’s Story of Beating the Odds,” with this incident because of his fighting spirit. It’s a resilience that friends say Abbott has possessed his whole life. 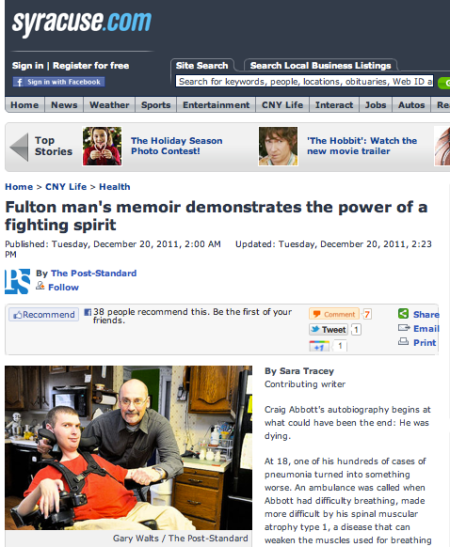 This entry was posted on Thursday, December 22nd, 2011 at 8:28 AM and is filed under Inspiration, New York, United States. You can follow any responses to this entry through the RSS 2.0 feed. You can leave a response, or trackback from your own site.