FightSMA, an international nonprofit organization created to strategically accelerate the search for a treatment and cure for spinal muscular atrophy (SMA), has named Ron Imbach as its new Executive Director, effective Dec. 1, 2011.

Ron Imbach is replacing the current CEO and founder of FightSMA, Martha Slay, who guided the organization from its inception in 1991 until the present. Under Martha’s leadership, FightSMA has grown from an initial crusade to bring higher levels of awareness and understanding of spinal muscular atrophy (SMA) to the public to a leading advocate and research-centered organization focusing on the treatment and cure of the disease and support for the families of children with SMA.

“For the past 20 years, Martha Slay has led FightSMA with great passion, intelligence, and dedication; the SMA community owes her a great deal of gratitude for her accomplishments,” said FightSMA Chair Mike Calise. “She has been a great inspiration to us all personally and professionally.” 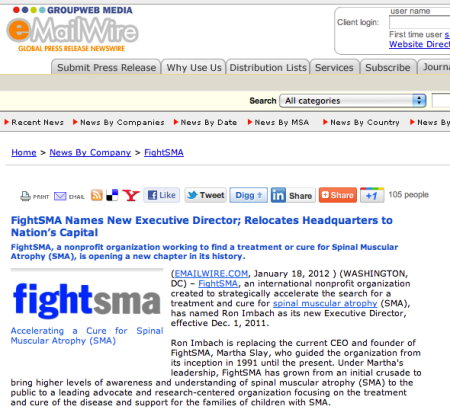 This entry was posted on Monday, January 23rd, 2012 at 3:03 PM and is filed under FightSMA, Maryland, Press Release, United States. You can follow any responses to this entry through the RSS 2.0 feed. You can leave a response, or trackback from your own site.