It’s called Spinal Muscular Atrophy Type 1 and it has become the “new normal” for the Kingsley family.

Scott and Allison Kingsley’s youngest son Brett was diagnosed with SMA-1, a disease that affects voluntary muscle movement, when he was 7 months old. He just turned 6 in March and continues to beat the odds, thanks to a family-based system of care and what his mother calls their “circle of hope.”

It’s a circle that starts with Brett or “Prince Brett,” as Nationwide Children’s Hospital social worker Lori McCullough and other staff members there have dubbed him. He’s a blond-haired boy with dark eyes that move constantly, taking in everything around him, and elegantly long fingers that dance across the controls of the DynaVox, a speech-generating device, that talks for him.

The next ring of the circle is populated by his immediate family. Allison is the mom. You could call her a homemaker, but to do so you’d have to expand your definition of “home” to include most of the 614 area code. When she isn’t overseeing much of Brett’s therapies, doctors’ visits and all three of her children’s schooling in the Hilliard district, she’s giving speeches to new employees at Nationwide Children’s Hospital as part of their Family Advisory Council’s “Family as Faculty” program. And, of course, she’s also getting everyone else in the family fed, clothed and off to school, work or church each day. 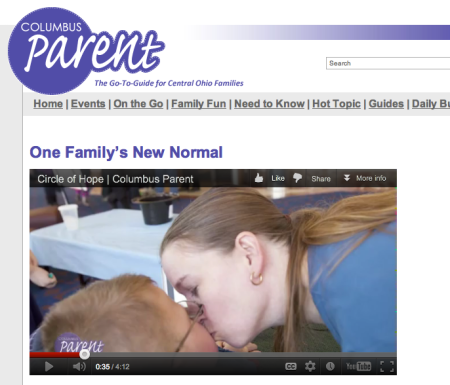 This entry was posted on Thursday, April 19th, 2012 at 7:54 AM and is filed under Awareness, Inspiration, Ohio, United States. You can follow any responses to this entry through the RSS 2.0 feed. You can leave a response, or trackback from your own site.

One Response to One Family’s New Normal [Video]