ALEXANDRIA, VA. July 20, 2012—A bill to authorize the National Institutes of Health (NIH) to support the creation of up to 20 pediatric research consortia focused on diseases such as spinal muscular atrophy (SMA) was introduced yesterday in the U.S. House of Representatives.

“We are thrilled about this bill which is the result of the dedication of so many in the SMA community,” said Martha Slay, founder and immediate past president of FightSMA. “Legislation to benefit SMA is at the heart of the FightSMA mission.”

“Over the past year, FightSMA has worked with our champions in the Congress, Representatives McMorris Rodgers and Lois Capps, on this important legislation. With the support of longtime FightSMA ally House Majority Leader Eric Cantor (R-VA), these two key members of the House Energy and Commerce Committee’s Subcommittee on Health have collaborated to craft bipartisan legislation that will advance translational research and clinical trials for a variety of rare pediatric disorders, with SMA serving as a model disease,” said Ms. Slay.

“I am proud to join Rep. Capps in introducing the very important National Pediatric Research Network Act. She has been an instrumental leader in the fight to promote pediatric research for genetic disorders, especially spinal muscular atrophy and Down syndrome,” said Rep. McMorris Rodgers. “As the mother of a son with Down syndrome, I am confident this legislation will go a long way to improving the lives of those with genetic disorders. I look forward to working in a bipartisan way to make sure this bill is signed into law.”

“I am proud to co-author this legislation with my friend (Rep.) Cathy McMorris Rodgers, which would go a long way to increasing and improving research on children’s illnesses–especially rare and complex diseases–and developing new treatments to fight them,” said Congresswoman Capps. “Every parent’s worst fear is that their child becomes sick, and we owe it to all parents to do what we can to fight childhood illnesses. I would also like to thank my constituents, Bill and Victoria Strong, for their tireless work on behalf of their daughter, Gwendolyn, and all children with Spinal Muscular Atrophy and other rare diseases. Their dedication to fighting this terrible disease has been an inspiration for me and a driving force behind this bill,” said Congresswoman Capps. 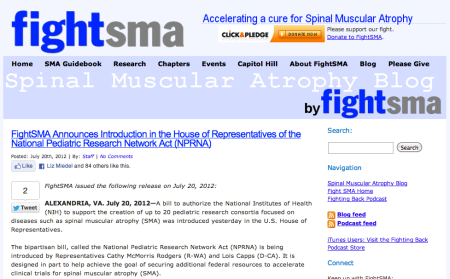 This entry was posted on Saturday, July 21st, 2012 at 7:38 AM and is filed under FightSMA, Legislation, United States, Virginia. You can follow any responses to this entry through the RSS 2.0 feed. You can leave a response, or trackback from your own site.