About 11 months ago, Ashleigh Jacques was born to a Taunton family, appearing to be a happy and healthy baby.

But at three months old, her parents noticed frightening signs that something was terribly wrong with their daughter. She couldn’t move.

“We were all concerned,” said Ashleigh’s mother, Kristen Jacques, a social worker who lives in East Taunton. “She wasn’t moving at all. She wasn’t rolling over. She couldn’t lift her head. She had a hard time with her hands.”

Three months later, Ashleigh was diagnosed with Type 1 spinal muscular atrophy (SMA), the most severe form of the motor neuron disease. Doctors have given the baby a life expectancy of just two years. 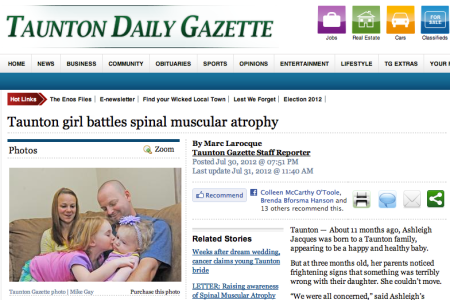 This entry was posted on Saturday, August 18th, 2012 at 8:13 AM and is filed under Awareness, Massachusetts, United States. You can follow any responses to this entry through the RSS 2.0 feed. You can leave a response, or trackback from your own site.