To “Walk a Mile” in Her Wheelchair

To “Walk a Mile” in Her Wheelchair

Thousands of children in the United States suffer from muscular dystrophy and the experience can sometimes alienate them from their peers.

However, one Anchorage school set about trying to bridge that gap with a unique project.

When Krista Stapleford was three years old she was diagnosed with spinal muscular atrophy, which impacts her ability to use all of the muscles in her body, particularly her legs.

So in order to get around, 12-year-old Krista relies on a wheelchair, but that means she stands out and not necessarily in a good way. 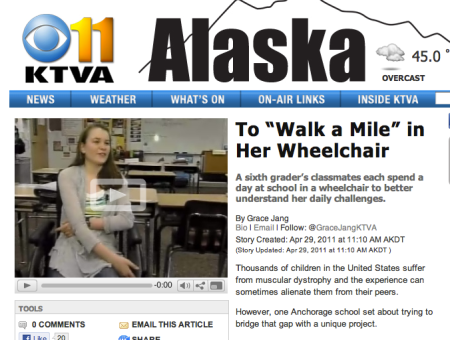 Lisa Evans, 41, will embark on a two-week trek in France later this year in honour of her 12-year-old son Jack, who has a degenerative neuromuscular disease.

Jack was diagnosed with spinal muscular atrophy when he was eight months old and we were told not to expect him to live past two. He suffers from a genetic disease which, in short, affects the motor neurons in his spine and causes his muscles to waste away. As a result, Jack is unable to sit, crawl or walk. He cannot swallow, so he is fed through a tube and he’s also susceptible to recurrent chest infections. He relies on a ventilator to breathe at night and always has a suction machine with him to clear secretions. Jack spends his life in an electric wheelchair.

The condition occurs in one in 10,000 live births and is the greatest genetic killer of kids under the age of two.

I’m taking part in the seventh ChallengeMD! in Mt Blanc, France, to raise more than $250,000 for the Muscular Dystrophy Association. There’s 17 Aussies participating in the 14-day trek, from June 24 to July 8, which circumnavigates Mt Blanc through France, Italy and Switzerland.

CAMPBELLTON – It takes 16 muscles to hop on one foot – and plenty more to smile like Jenny Larocque, the 2011 Hop for Muscular Dystrophy ambassador for the province.

Jenny is a Grade 1 student at Lord Beaverbrook School and the fact that she has spinal muscular atrophy does not slow her down. Jenny likes to watch the TV sitcom iCarly, play on the Wii, and she loves to play with her big brother, Shane, and her best friend, Selena. She also enjoys camping. Jenny recently joined Brownies and she is very excited about that.

On April 21, Lord Beaverbrook Elementary School will be hosting a HOP for Muscular Dystrophy event for the students. The HOP for Muscular Dystrophy is a national educational fundraising initiative. At the HOP event, children can hop, dance or move – according to their own ability – to music. Funds raised support the tens of thousands of Canadians affected by a neuromuscular disorder through research for a cure, education and services.

When I graduated from high school in 1984, there were no tearful farewells to friends and girlfriends while a New Wave soundtrack played in the background like some John Hughes movie.

Frankly, I was relieved to be free to start my writing career, and hopefully be heralded as the next William Gibson. When my science fiction failed to sell, I switched to writing thrillers and, consequently, hoped to be called the next Frederick Forsyth. I’ve been so busy trying to break into the literary (or pulp) world that I’ve never spent much time poring over scrapbooks.

Now that I’m in my 40s, and finding it increasingly difficult to relate to everything from popular music to slang, I wonder whatever happened to the people with whom I’d swap cassettes (that’s how we listened to music in the pre-download days), trade comic books, gripe about school, and gather at my house for weekend-long Dungeons & Dragons sessions.

Like many with disabilities, travel is pretty much impossible for me, so I’ve never attended any class reunions. However, I’ve been able to overcome feelings of isolation through the use of modern technology. In this case, I’m talking about social networking.

OKLAHOMA CITY — A 5-year-old girl has helped raise awareness and money for MDA, but now a crime has her family wondering how they’ll get her to doctor appointments for her own life-altering disease, Spinal Muscular Atrophy.

Teresa Johnson’s daily routine was severely disrupted Wednesday, but she almost didn’t notice it at all. She took her oldest daughter to school using her mother’s vehicle and came back home as usual. It was only when she went to pick her daughter up that afternoon that she noticed something was missing.

“And lo and behold, my car is gone. And come to find out, it had been missing all day,” Johnson said. “I didn’t know to look for my car to be missing. I wouldn’t expect it to be missing.” 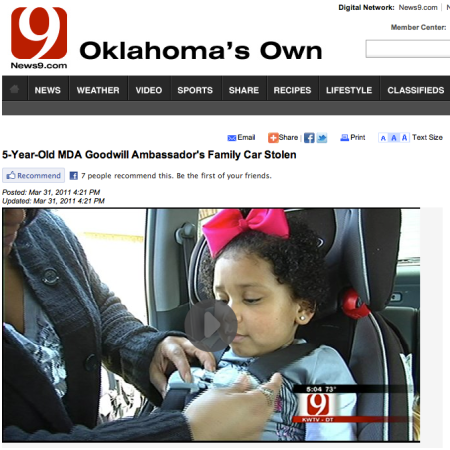 For anyone who has suffered a sprained muscle or a broken bone of some sort, the time it takes to heal and get back to the point of strength before suffering the injury takes a long period of time, but the strength will return.

For someone who has been diagnosed with Spinal Muscular Atrophy or SMA, losing strength in their muscles happens over a period of time and since there is no known cure for SMA, that strength will never return.

11-year-old Helen Na knows how this feels and has been dealing with SMA for as long as she can remember. At just three-years-old Helen was diagnosed with Spinal Atrophy Muscular Dystrophy.

Last night, Helen was the guest of honour at the Leduc Fire on the Roof Ambassador Gala and she spoke to the large crowd about her story of a young girl who has to go through the daily chores like anyone else, but has to do so while fighting the losing battle against muscular dystrophy.

Siblings beat the odds, continue to fight for a cure for muscular dystrophy

Siblings beat the odds, continue to fight for a cure for muscular dystrophy

OCEANSIDE — Sarah Carlson of Oceanside has exceeded expectations all her life. When she was diagnosed with muscular dystrophy, or MD, at 18 months old her parents were told she wouldn’t live beyond five years. Today she is a popular, 22-year-old biology major at Palomar College with plans of becoming a research scientist.

Younger brother, Scott, 20, also has MD. Like Sarah, he’s both tough and smart. Scott’s a junior in the aeronautical engineering department at UCSD with plans to go on to graduate school and pursue a career with Boeing or another defense contractor.

Currently, the siblings are recruiting members for Carlson & Co., their fundraising team, which is generating sponsors for the upcoming MDA Muscle Walk San Diego in Mission Bay on Feb. 27.

WALTHAM, Mass., Dec. 15, 2010 /PRNewswire/ — Repligen Corporation (Nasdaq: RGEN) today announced that the Company has received $1,400,000 in research funding from the Muscular Dystrophy Association (“MDA”) to support the ongoing development of RG3039 for Spinal Muscular Atrophy (“SMA”).  RG3039, our lead compound, is an inhibitor of an RNA processing enzyme which targets increased production of SMN, a protein of deficient levels in patients with SMA.  The goal of this grant is to support the advancement of RG3039 into human clinical testing, including continued evaluation in preclinical models of SMA, GMP manufacturing for human clinical trials and early clinical evaluation in healthy volunteers and patients.  Funding from the Muscular Dystrophy Association provides important support for Repligen’s development programs and access to a global network of scientists, physicians and patients.  Repligen has previously been awarded two research grants from the MDA to support its Friedreich’s ataxia program. 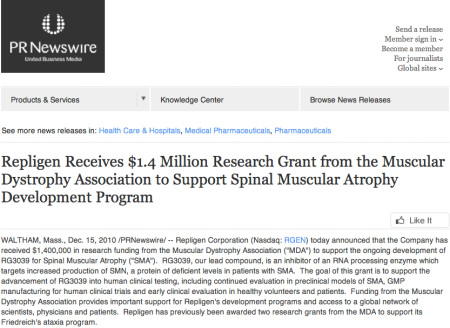