Ms. Wheelchair Massachusetts encourages others to pursue their dreams

Ms. Wheelchair Massachusetts encourages others to pursue their dreams

Marlborough – Most Sunday mornings Patti Panzarino can be found attending church service at Greater Grace Christian Fellowship in Marlborough, 187 Pleasant St. Outside of the sanctuary, she is not only a founding member of the band, OLYPSYS, but she has recently been crowned Ms. Wheelchair Massachusetts.

Panzarino was born with Spinal Muscular Atrophy Type 2 (SMA 2), a genetic disease in which loss of nerve cells in the spinal cord affects the part of the nervous system that controls voluntary muscle movement. Although Panzarino has lived her life in a wheelchair, she has not let her disability get in the way of her dreams.

Panzarino brought her message of empowerment to the Ms. Wheelchair Competition March 3. Her platform of “Creative Perseverance,” born out of life experiences, inspired the judges to crown her Ms. Wheelchair Massachusetts 2012 at the Massachusetts Hospital School in Canton. The mission of the Ms. Wheelchair America Program, and the individual state programs, is to “provide an opportunity for women of achievement who utilize wheelchairs to successfully educate and advocate for individuals with disabilities,” according to the organization’s website http://www.mswheelchairmass.org.

“The platform for my year as Ms. Wheelchair Massachusetts is ‘Creative Perseverance.’ This has actually been the theme of my whole life,” Panzarino said. “I learned to self-advocate from my older sister who mentored me at a very young age. The more that people with disabilities push through obstacles and participate in life, the more people will see us and our acceptance and encouragement to participate increases. It becomes an upward spiral.” 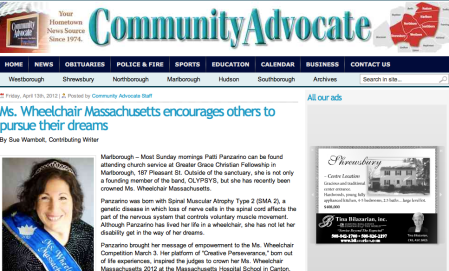 There are things in life we take for granted, like walking, eating, or using our muscles for the basics of day-to-day activities we need to get through work or school. Eleven-year-old Sammy Cavallaro doesn’t have this luxury. He has Spinal Muscular Atrophy (SMA), a motor-neuron disease that confines him to a wheelchair and impairs his muscular movements.

On Feb. 18, Sammy’s family is organizing a major fundraiser to generate awareness of the little-known disease and to raise funds for research. The event, called ‘Sammy’s Valentine Gala’, will take place at 6600 Montée de Liesse in Ville St. Laurent.

“It’s like an Italian dinner; we eat, we drink, we dance, there is a silent auction, there are raffle prizes, just a lot of fun and you give to a great cause,” said Sammy’s mother Rosa Cavallaro, last week. “Every year we do a fundraiser, around Valentine’s Day. This is our ninth one.” 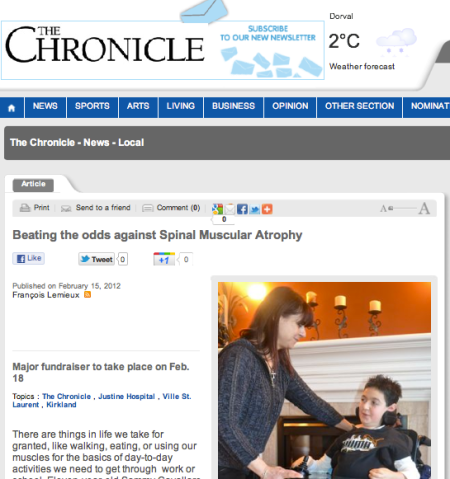 Ella’s Story: ‘I’m Not Here to Save Her. I’m Here to Take Care of Her’

Ella’s Story: ‘I’m Not Here to Save Her. I’m Here to Take Care of Her’

Ella Casten is a smart, inquisitive little girl with a smile that will melt your heart.

In most ways, she is a typical 1 1/2-year-old. She loves her dog, her toys, and her brother and sister, Henry and Ava. She speaks in cute toddler language and wants to do things all by herself.

But she can’t. Her muscles won’t let her. Ella has a rare, genetic neuromuscular disease called spinal muscular atrophy, for which there is no treatment or cure. Her motor neurons are dying, causing her to lose muscle function. She first lost the use of her legs, and now she has trouble reaching and lifting even small toys.

Ella was born on June 10, 2010. She started out seemingly healthy, hitting all the normal developmental milestones in her first year. She began to stand and take a few steps.

Just five months ago, all that changed.

Her parents, Lincoln Elementary School teacher Michael Casten, and Lindsay Casten, a former Lincoln teacher, began to try to unravel the mystery with the help of pediatricians and therapies. An Internet search revealed what they had hoped was not the answer.

“I’ll never forget that night,” Lindsay said. “I Googled hypotonia (poor muscle tone) and hand tremors and one of the things that came up was SMA. Of all the possibilities we had been told, we didn’t want it to be that.”

Precious moments with our baby boy

Precious moments with our baby boy

Watching your baby die from an incurable condition must be the worst thing for any parent. Catherine Scott spoke to one mother who has done just that.

Lucas Hannigan was a perfect baby. Unlike his big brother James he was an easy going baby who slept well. He passed all his newborn health checks and soon his parents Jenny and Steve were able to take their new baby home to Bingley.

But at his eight-week check the GP was puzzled – Lucas was thriving but he was very weak – he called it Hypotonia – and also noticed that his Moro (or startle reflex) was absent, although it had been their when he was born.

The GP wasn’t overly worried but he wanted them to see a paediatrician as he had never seen this before.

The family was referred to a neuromuscular specialist at the Leeds General Infirmary (LGI) .Eventually after a DNA test, Lucus was diagnosed with Spinal Muscular Atrophy (SMA), but by then the family had already pretty much diagnosed the condition themselves.

“The hospital wouldn’t tell us anything, so I put Lucas’s symptoms into the internet and almost immediately came across the Jennifer’s Trust website and couldn’t believe what I was reading. 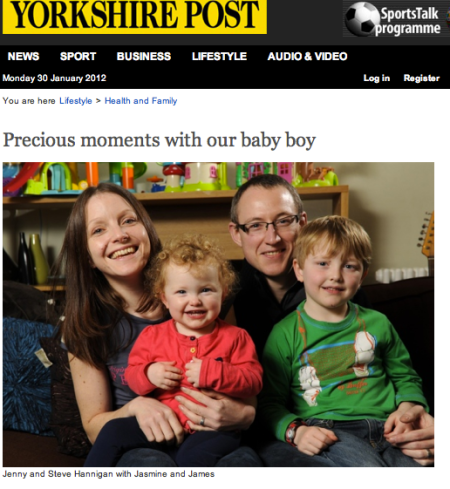 When Danielle Terborg learned her 3-month-old son, Logan, had a rare illness called SMARD — spinal muscular atrophy with respiratory distress — she was faced with a difficult decision.

Doctors told her she could give him “comfort care” or hook him up to breathing and feeding tubes for the rest of his life, with the knowledge that he may not live until his second birthday.

“It was our family’s belief that it was best to do everything we can and give him the best life possible,” said Terborg, who brought Logan home from Children’s Hospital Oakland in September.

Before that, she and other family members spent hours by Logan’s side, playing with the blue-eyed, dimple-cheeked boy whose smile fills the room, even if he has a ventilator tube that keeps him alive. His grandmother, Peggy Thomas, and his mother alternate caring for him, along with in-home nurses. In the meantime, they have also researched his disease, finding one boy with it has lived to age 20.

Dr. Gregory Cox, a researcher at the Jackson Laboratory in Bar Harbor, Maine, is one of the few scientists in the world studying the disease and trying to find a cure.

It is so rare, he said, that statistics about how many children have it are not available, especially since so many victims die very young.

A mum whose baby daughter died shortly after she was diagnosed with a rare condition wants to raise awareness of it and its treatment.

Mrs Bevan, of Hunters Hill, Burghfield Common, believes that little Nicole was failed by the RBH and that she may have lived longer if things had been done differently.

Neurologists diagnosed Nicole with SMA on Friday, September 23, and Mrs Bevan felt her husband Nick and she were told very little about the condition except that their daughter “would have 12 months give or take”. 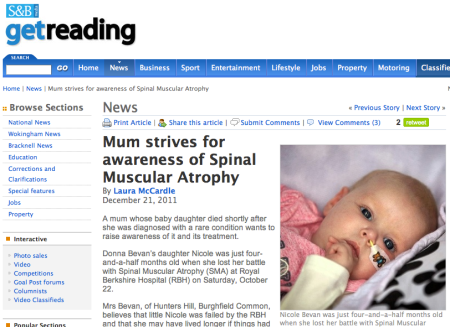 Karah Barry’s mind is as sharp as any other 4-year-old’s.

She is bright and personable, reads, participates in a preschool program and plays on a miracle league baseball team.

Karah’s body, however, prevents her from participating in a lot of other activities common to girls of her age.

She has spinal muscular atrophy type 1, commonly referred to as SMA.

Karah cannot walk, talk, sit, or swallow and she is at high risk of acute respiratory failure. She relies on an automatic cough assist machine and a technique called CPT because she has no ability to clear secretions.

“She is a prisoner in her own body,” said Danielle Barry, Karah’s mother. 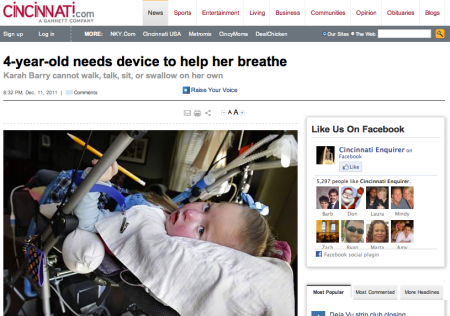 SMAHeadlines.com
Create a free website or blog at WordPress.com.