Raising a big amount of money hasn’t come easy for one Woodbury mom who’s trying to do something special in honor of the daughter she lost.

Almost eight years later, Millington calls her youngest daughter Emerson a miracle. Emerson had a one in four chance of inheriting the same deadly muscular disease that took her sister, Madison Claire.

To ensure that Emerson wasn’t born with Spinal Muscular Atrophy, Millington and her husband used In Vitro Fertilization and a process which tests the eggs for genetic abnormalities before they’re fertilized.

The time spent with Emerson is special considering the difficulties of parenting a child with SMA.

“(Madison) had her special stroller. We had oxygen tanks we had to take with,” said Millington. “Even going to the park, we couldn’t go through the sand and rocks for me to also be with my other two children.”

It was that specific challenge that compelled Millington to help others. After Madison died, she made it a priority to raise enough money for a playground that every kid could use, in honor of her daughter.

Heroes In The Making: Luke Hennessy and Hayley Nilsen

Heroes In The Making: Luke Hennessy and Hayley Nilsen

Six-year-old Luke Hennessy and 7-year-old Hayley Nilsen got the thrill of a lifetime Monday at Target Center. The two were the Timberwolves’ special guests during their game against the Kings, and Luke and Hayley got the opportunity to be recognized on the court, watch the game and be part of the Wolves’ family.

It was the Timberwolves’ way of honoring Luke, of Prior Lake, and Hayley, of Edina, for their courage and strength.

As part of WolvesCare Month presented by C.H. Robinson Worldwide, the FastBreak Foundation is focusing its attention on the Timberwolves’ toughest fans this month—children with life-threatening or long-term illnesses. Luke and Hayley were Monday’s “Heroes In The Making.”

Timberwolves President Chris Wright and C.H. Robinson Worldwide Representative Maxim Rivkin presented them each with a jersey and an autographed team ball at center court during the third quarter.

Before Madison Claire Millington died at the age of 2 in 2004, her mother, Dana, was frustrated by Madison’s inability to enjoy any of Woodbury’s playgrounds.

Madison was born with spinal muscular atrophy—a genetic disease that destroys the nerve cells controlling voluntary muscle movement—and she was restricted to a stroller.

“We couldn’t take Madison and our other two children together to go to any of the playgrounds in Woodbury,” Dana Millington said, “because she was stuck in a special stroller and I wasn’t able to get her access to the structure.”

Shortly after Madison’s death, Dana heard about a California organization, Shane’s Inspiration, founded by parents who had lost their son to spinal muscular atrophy. The organization raised money to build playgrounds where children with physical and developmental disabilities could play alongside their “typically able” peers. 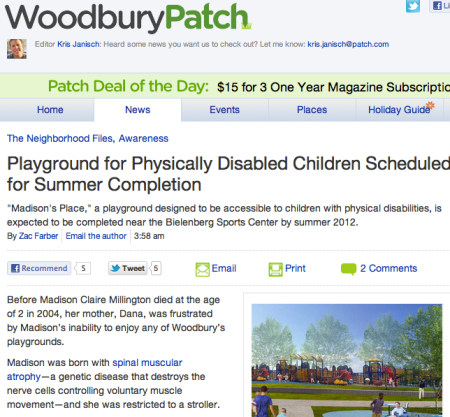 ‘Madison’s Place’ vows to put smiles on many faces

‘Madison’s Place’ vows to put smiles on many faces

Woodbury resident Dana Millington wants her children to remember their sister, Madison Claire, in a happy sense. To be able to smile when they hear her name.

Though still grieving after losing their baby girl at age of 2 from complications of spinal muscular atrophy (SMA), the Millingtons knew they wanted to do something to help children with disabilities.

They wanted to bring “Madison’s Place” to the east metro.

The all-inclusive playground will be designed with a special, wheelchair-accessible, rubber surface for children with physical hardships who cannot otherwise enjoy summers at the park. Plans call for the playground to be built at Bielenberg Sports Center.

Fundraising for the project began in 2008 and since then, the Madison Claire Foundation raised $60,000. A September gala is aiming to collect another $100,000.

“I hope it’ll be full of smiles and busy,” Millington said of the playground. 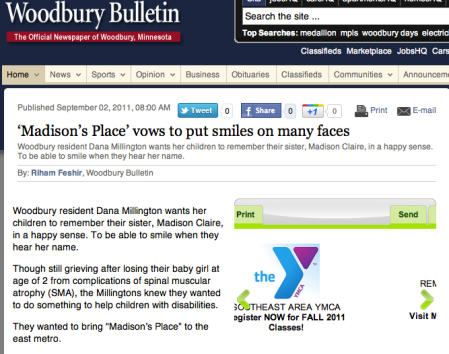 MAHTOMEDI, Minn. – A mother dedicated to helping children with special needs ends up needing some help for her and her family. Their son, born with a rare disease. On the surface this could be just another sad story of a little boy who will only live a few more months. But from a friend who offers childcare, a stranger who brings a meal and co-workers organizing a benefit, this is a story of faith, family, and those who epitomize the people of Minnesota.

With three beautiful daughters you could imagine the excitement of Mike and Nicole Newfield when mom delivered little Benjamin 6 months ago. But the excitement turned to concern after just a few months.

For four years, Kelly Madsen has been taking her son to play ball in Blaine every Thursday night.

The hour- and- a half-long drive wasn’t very convenient for the Woodbury mom of 9-year-old Bryce Madsen who suffers from spinal muscular atrophy (SMA), a rare disease characterized by muscle atrophy and loss of motor function.

But Blaine was the one location she could take her son to play “miracle” baseball on his power wheelchair, without worrying about a thing.

Beginning this summer, however, Madsen and a number of other families from the east metro won’t have to drive so far to participate in Miracle League — a nonprofit organization that helps communities build baseball fields for children with mental or physical disabilities.

A Woodbury field will be home to the East Metro Miracle League this summer, when construction will be finished after about three years of fundraising.

Mpls. Dance Co. Shows There Are No Boundaries In Ballet

Mpls. Dance Co. Shows There Are No Boundaries In Ballet

MINNEAPOLIS (WCCO) — In a small studio in Minneapolis, Leah Nelson is helping her students master a bourrée turn. But really, she’s teaching them much more than ballet moves. She’s teaching the girls, who all use power wheelchairs, that they can be dancers.

“I like to move to the music,” said Mary Kate Bigelow of Rosemount. “It’s always been my dream.

”The girls taking one of the classes at Young Dance have various types of a neuromuscular disease called Spinal Muscular Atrophy, or SMA. Their cognitive skills are unaffected, but their muscles are weak and their bodies fragile.

For many of them, it’s their first formal dance class. And while they can’t dance on their feet, they can use their power chairs to do the same moves.

A gift of independence

A gift of independence

DeAnn Runge of Alexandria was a senior in high school when she set her sights on getting a dog. She was looking for more than just companionship – she was seeking greater independence.

There are varying degrees of SMA, and Runge says she’s “in the middle” of the spectrum. She has never been able to walk and has limited upper body strength.

She was watching a Dateline television program about a girl with SMA who was aided in her daily tasks by a service dog.

“Instantly I knew having a service dog would change my life,” said Runge, a 1998 Jefferson High School graduate.

When your health plan goes away

When your health plan goes away

What happens when your health care plan stops existing? You hope you’re already enrolled in another one — especially if you’re someone with physical disabilities.

Two recent stories from Minnesotans in MPR’s Public Insight Network show how changing plans can become a crisis for those who depend on them for medical care and services to live independently.

Hegland, 38, has spinal muscular atrophy. He and 1,275 other Twin Cities adults with physical disabilities had to find new insurance plans after UCare decided to close its UCare Complete program, also known as Minnesota Disability Health Options (MnDHO), as of Dec. 31.

The life of a community newspaper reporter is like no other. No two weeks are ever the same. How many other professions can have you participating in an otter release one week and taste-testing wines another?

One of the things that attracted me to journalism in the first place was this exposure to a wide variety of experiences and people.

So, as we put another year of news to bed, it seems a good time to sit back and reflect on the stories that really made me feel lucky to get paid to do what I do. These are the stories that I start with “I got to … ” rather than “I had to … ” when I recount them to others. 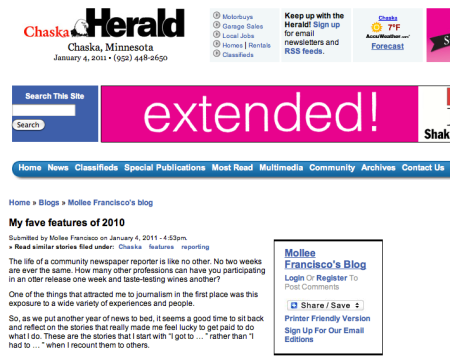