CARLSBAD, Calif., Dec. 19, 2011 /PRNewswire/ — Isis Pharmaceuticals, Inc. (NASDAQ: ISIS) announced today that it has initiated a Phase 1 study of ISIS-SMNRx in patients with spinal muscular atrophy (SMA). SMA is a severe motor-neuron disease that is the leading genetic cause of infant mortality. Isis is developing ISIS-SMNRx as a potential treatment for all Types of SMA.

“SMA is a devastating disease that leads to the loss of motor neurons resulting in muscle weakness and respiratory failure in children. The genetic cause of this disease is well understood, but there are currently no effective disease-modifying therapies. Currently, treatment of SMA is entirely symptomatic and focuses on preserving muscle strength and lung function by physical therapy and assisted ventilation. This supportive approach has improved the natural history of SMA by extending life expectancy, but muscle weakness and atrophy are not affected. A disease-modifying drug like ISIS-SMNRx that specifically targets the cause of the disease could, for the first time, restore muscle strength and respiratory function and dramatically improve the children’s function and quality of life,” said Darryl C. De Vivo, M.D., Sidney Carter Professor of Neurology and Pediatrics and Co-Director of the Motor Neuron Center at Columbia University Medical Center. 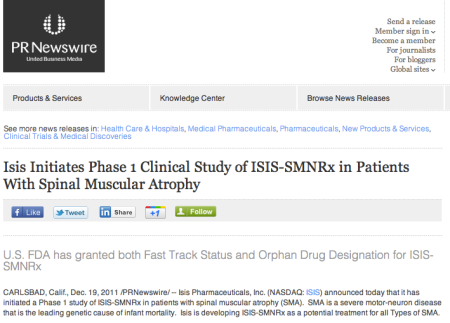 Roche Holding AG will pay as much as $490 million for experimental drugs from PTC Therapeutics Inc. to treat a genetic muscle-weakening disease, in a deal that sets up a race with rival Novartis AG.

The Basel, Switzerland-based drugmaker will pay closely held PTC Therapeutics $30 million up front, and another $460 million if a drug for spinal muscular atrophy achieves certain regulatory and commercial goals, the companies said today in a statement. PTC, based in South Plainfield, New Jersey, would also get royalties on sales of drugs from the collaboration.

Spinal muscular atrophy afflicts 18,000 people in the U.S. and Europe and causes progressive muscle weakness, according to the Spinal Muscular Atrophy Foundation. Kids with severe cases die within a few years, while those with mild cases can live a normal lifespan with disabilities. There are no approved medicines to treat the causes of the rare disorder, said Luca Santarelli, senior vice president of neuroscience at Roche.

“There are absolutely no therapeutic options for these children,” said Santarelli in a phone interview. “It is a frightening disease.”

Don’t be charitable about jobs bill

Don’t be charitable about jobs bill

President Obama revived one of his favorite revenue-raising proposals in his recent jobs plan: limiting the itemized tax deductions that “millionaires and billionaires” (defined as individuals earning over $200,000 or couples earning more than $250,000 per year) can take for mortgage interest, state and local taxes, and charitable contributions.

By the White House’s calculations, this modest move would raise 86.9 percent of the $467 billion needed to pay for the jobs plan over the next 10 years.

While the White House’s revenue calculations are highly questionable, what aren’t questionable are the consequences of the president’s proposal.

According to Internal Revenue Service figures, individuals claimed nearly $34.9 billion in charitable deductions on their federal tax returns in 2009. Households reporting $200,000 or more in annual income claimed $19.14 billion, or 54.9 percent, of these deductions.

Prior to the new jobs initiative, the president previously had gone after the charitable deduction in his fiscal 2012 budget proposal. That proposal called for limiting the tax deduction for high-income earners by as much as 30 percent.

So let’s recognize reality and do some simple math. Here is the reality: at least some well-to-do households will reduce their charitable donations if the tax deduction is cut, because more of their money will go to government, making less available for charity. Logically, at least some fraction of the $19.14 billion now going to charity would disappear.

There are those, including some in the White House, who think government should do everything. But government’s track record is less than exemplary. The president’s attempt to go after the wealthy by going after the tax deduction for charitable contributions will have real human costs.

Consider the case of former Goldman Sachs partner Dinakar Singh, whose daughter was diagnosed in 2001 at 19 months old with Spinal Muscular Atrophy. The condition causes the nerve cells that control the body’s muscles to deteriorate, with severe cases causing death within a few years and less severe cases requiring substantial supportive care over the patient’s lifetime.

The malady makes the nerve cells that control muscles gradually deteriorate. There are no treatments, let alone a cure, Bloomberg Markets magazine reports in its October issue. Worse still, while the gene causing the ailment had recently been discovered, nobody in the drug industry was doing much about it, he says.

“I was fearful and anxious that treatments would be developed, but far too late to save Arya,” says Singh, 42, who founded and runs New York hedge fund TPG-Axon Capital Management LP, which has $8.1 billion in assets. “We didn’t want to find out 25 years later that the science was really there but there isn’t a drug because nobody focused on it.”

Singh, who left Goldman in 2004, has spent almost $100 million of his own money to create and fund the Spinal Muscular Atrophy Foundation. He wants to discover and develop a drug that he hopes will help his daughter, who is one of 25,000 SMA patients in the U.S. Children with severe forms often die within a few years, while those with mild cases can live a normal life span with supportive care. Arya, 11, and starting sixth grade, uses a wheelchair. 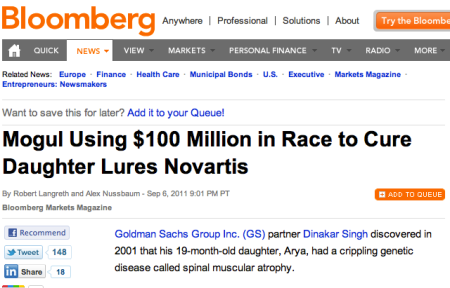 Enzo Biochem, Inc. and the Spinal Muscular Atrophy (SMA) Foundation today announced that Enzo’s wholly owned subsidiary, Enzo Life Sciences Inc., has launched a unique immunoassay (ELISA) system which can be used for the identification and detection of Survival Motor Neuron (SMN) protein. The kit is the result of a collaborative agreement between Enzo and the SMA Foundation.for the development of reagents and assays for SMN protein. The availability of an effective SMN ELISA could further enable and expedite drug discovery, development and therapy for Spinal Muscular Atrophy, the leading genetic cause of mortality in infants and toddlers.

Newswise — The Spinal Muscular Atrophy Foundation announces the addition of Andrew Knight, Helen Meates, Stephen Mikita, Juli Oh and Simon Prisk to the SMA Foundation Board of Directors. They join a distinguished group of business and scientific leaders who oversee the SMA Foundation. 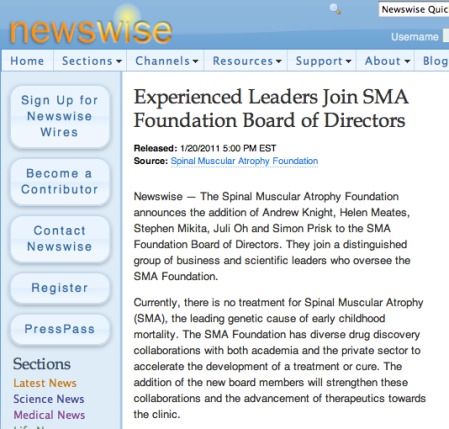 NEW YORK and AUSTIN, Texas, Jan. 19, 2011 /PRNewswire/ — The Spinal Muscular Atrophy (SMA) Foundation and Rules-Based Medicine, Inc. (RBM) announced today that they have reached the first milestone in a program to develop a panel of plasma protein biomarkers for SMA using RBM’s Multi-Analyte Profiling (MAP) technology platform.  In this collaboration, RBM will discover and also confirm plasma protein biomarker candidates previously identified from the multicenter Biomarkers for SMA (BforSMA) clinical study sponsored by the SMA Foundation and conducted by BG Medicine. The identification of such biomarkers may help to assess drug efficacy and shorten the duration of clinical trials of SMA therapies. 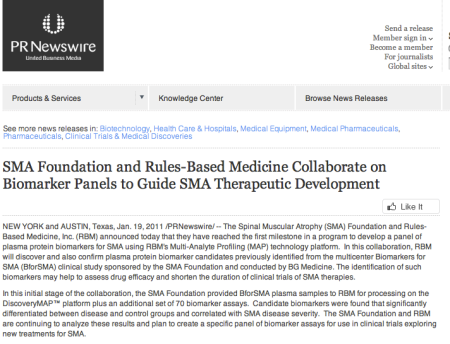