When I graduated from high school in 1984, there were no tearful farewells to friends and girlfriends while a New Wave soundtrack played in the background like some John Hughes movie.

Frankly, I was relieved to be free to start my writing career, and hopefully be heralded as the next William Gibson. When my science fiction failed to sell, I switched to writing thrillers and, consequently, hoped to be called the next Frederick Forsyth. I’ve been so busy trying to break into the literary (or pulp) world that I’ve never spent much time poring over scrapbooks.

Now that I’m in my 40s, and finding it increasingly difficult to relate to everything from popular music to slang, I wonder whatever happened to the people with whom I’d swap cassettes (that’s how we listened to music in the pre-download days), trade comic books, gripe about school, and gather at my house for weekend-long Dungeons & Dragons sessions.

Like many with disabilities, travel is pretty much impossible for me, so I’ve never attended any class reunions. However, I’ve been able to overcome feelings of isolation through the use of modern technology. In this case, I’m talking about social networking. 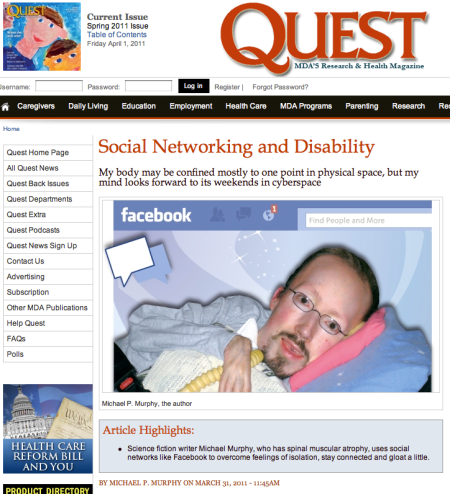 This entry was posted on Wednesday, April 6th, 2011 at 8:44 AM and is filed under MDA, Technology, United States. You can follow any responses to this entry through the RSS 2.0 feed. You can leave a response, or trackback from your own site.