Ari Kinarthy has a severe genetic disability that causes his muscles to waste away. He has been wheelchair-bound since age six – first manual, now electric.

At 23, his health is so fragile that the common cold puts him in the hospital several times a year.

But you wouldn’t know any of that, listening to his debut album, The Lion’s Journey, released June 12. Despite the very limited mobility caused by his Type-II spinal muscular atrophy, Kinarthy was able to compose and record jazz, rock and orchestral tracks, using a technology called Soundbeam.

He says it’s given him a new sense of purpose.

“I love to create things, the joy of creation is really what inspires me,” he said. “I never thought at the beginning that this would be a potential profession for me, but I do consider myself a composer and professional musician now.”

Researchers at Stanford University have for the first time sequenced the genome of an unborn baby using only a blood sample from the mother.

The findings from the new approach, published July 4 in Nature, are related to research that was reported a month ago from the University of Washington. That research used a technique previously developed at Stanford to sequence a fetal genome using a blood sample from the mother, plus DNA samples from both the mother and father.

The whole genome sequencing in the new Stanford study, however, did not require DNA from the father — a significant advantage when a child’s true paternity may not be known (a situation estimated to affect as many as one in 10 births in this country) or the father may be unavailable or unwilling to provide a sample. The technique brings fetal genetic testing one step closer to routine clinical use.

“We’re interested in identifying conditions that can be treated before birth, or immediately after,” said Stephen Quake, PhD, the Lee Otterson Professor in the School of Engineering and professor of bioengineering and of applied physics. “Without such diagnoses, newborns with treatable metabolic or immune system disorders suffer until their symptoms become noticeable and the causes determined.” Quake is the senior author of the research. Former graduate student H. Christina Fan, PhD, now a senior scientist at ImmuMetrix, and current graduate student Wei Gu are co-first authors of the article.

VICTORIA — A young Victoria musician is releasing his first album, despite a big hurdle.

Ari Kinarthy was told he wouldn’t be able to make music . That changed after he started attending the Victoria Conservatory of Music.

The 22-year-old is living with Spinal Muscular Atrophy; a genetic condition that weakens all the muscles in his body.

Thanks to technology called Soundbeam, Kinarthy can compose his own songs and perform them. It turns his movement into music.

It is available for sale at the Victoria Conservatory of Music.

For most of her years in school, 10-year-old Haydee Lopez’s ability to participate in class was extremely limited.

The School 29 student has spinal muscular atrophy, which is slowly eroding her physical strength and has confined her to a wheelchair. The muscles in her hands are so weak that Haydee cannot hold a pencil. Her reach extends just a few inches from her body, so she cannot use a keyboard. While her body lacks physical strength, her mind is sharp, and helping her express herself is a constant challenge for her teachers.

But despite her limitations, this school year Haydee wrote her first report. Using an iPad, she was able to type out full sentences to demonstrate what she learned about dolphins.

“I think this is the first time she ever saw something she did from beginning to end,” said her teacher, Becky Robbins.

Haydee’s story highlights the success some city schools are seeing as they use the latest technology trend to help their special education students.

While other schools and districts have taken a broader approach to buying iPads — some putting them in the hands of every student at every grade level — Rochester is taking a more focused approach, targeting students in the primary grades and those with disabilities.

Santa Barbara, CA — February 27, 2012 — The Gwendolyn Strong Foundation (theGSF), a Santa Barbara-based nonprofit launched “Say Hi! AAC” (Say Hi!), a first-of-its-kind augmentative and alternative communication (AAC) iPad app with the aim of opening the world of communication for those with severe physical disabilities, limited movement, and/or challenged dexterity. The unique app allows the user to communicate wants, needs, emotions, etc. via the iPad without ever physically touching the iPad touchscreen. Say Hi! is available for free in the Apple App Store.

Simple by design, the Say Hi! iPad communication app is completely customizable to suit the specific needs of the user. Once installed on the iPad, the user can create communication pages with boxes of words, phrases, images, and recorded sounds. Say Hi! requires the use of an iPad, which displays what the user would like to communicate, and two additional iPod Touch or iPhone devices. The two additional devices wirelessly connect to the iPad with one iPod/iPhone device acting as the “mover” and the other as the “selector.” The “mover” allows the user to move between customized boxes on the iPad communication app and the “selector” allows the user to select the desired box and “say” the associated word or phrase. Utilizing these connected devices in unison, the user can navigate the Say Hi! iPad communication app with almost no physical movement. Nothing like this currently exists. 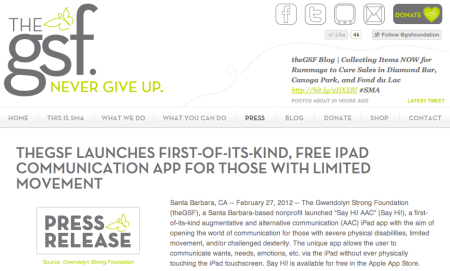 The program will initially focus on granting iPads to those impacted by SMA. SMA is a degenerative disease that causes weakness and wasting of the voluntary muscles. Cognitive ability is never hindered and those with SMA are bright in spite of their failing bodies. The iPad, coupled with the growing application library that accompanies them, are literally life-changing in assisting with communication, education, and independence. theGSF has secured funding for the initial fifty (50) iPads and will be announcing one (1) grant recipient per week for fifty (50) weeks beginning February 3, 2012.

“The iPad is opening up new avenues that were previously impossible,” said Victoria Strong, theGSF co-founder. “It’s large screen size, light weight, portability, and featherlight touch screen make access to education, entertainment, and independence possible and in some cases it is literally allowing children to communicate for the first time in their lives. Its impact is truly incredible.”

Kids with disabilities get high-tech boost

Kids with disabilities get high-tech boost

Technology makes our world easier, whether it’s reheating food in a microwave, using GPS to guide us to an unfamiliar location or clicking on the computer to talk face-to-face with someone on the other side of the globe.

But for children with disabilities, technology goes a step further, to help them better understand their own bodies and be part of the world around them. Handheld communication devices can lend a voice to answer a classmate’s question. Motorized wheelchairs allow for spontaneous exploration and discovery. Cochlear implants and other devices make it possible to hear.

Even technology created for the masses, like the iPad, can reduce the disconnect these children may experience and boost fine motor skills. Apps that offer back-and-forth questions and answers encourage socialization and interaction.

Still, there’s an ongoing struggle between developing new technology and meeting the existing needs of people with disabilities, said Cole Galloway, a physical therapy professor at the University of Delaware and one of several local researchers looking at ways to improve movement in children with disabilities. 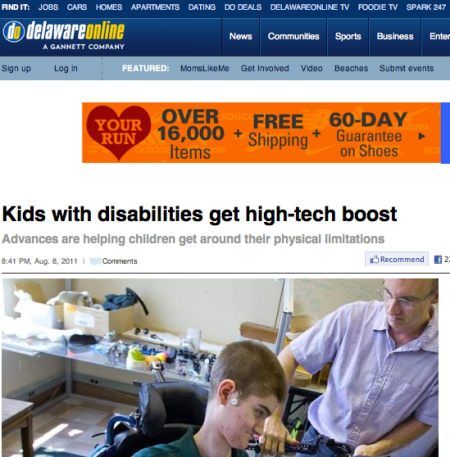 Big Meaning in the Smallest Movements

Big Meaning in the Smallest Movements

Born with spastic quadriplegia and cerebral palsy, 49-year-old Rick Hoyt has never been able to speak or use his hands to write. But that doesn’t mean he can’t communicate.

Hoyt (left, SED’93), who is best known for competing in more than 1,000 races, pushed in a wheelchair by his father, Dick Hoyt, is testing assistive technology developed through a decadelong collaboration between Margrit Betke, a College of Arts & Sciences associate professor of computer science, and James Gips, a Boston College professor of computer science, with help from more than 50 students.

Camera Mouse, a tool for people with medical conditions such as cerebral palsy, spinal muscular atrophy, ALS, multiple sclerosis, and traumatic brain injury, employs a computer webcam to lock onto and track a chosen section of the user’s face—a nostril or the tip of an eyebrow, for example—and then links that person’s head movement to a cursor on the screen. Move right and the cursor goes right. If Hoyt pauses for more than one second, dwelling over a button or link, it clicks to active.

Aleena Hope Miller was born 7 years ago with a genetic disorder that has a typical lifespan of 6 months to 2 years. Yet this spunky girl has beat the odds with this defect that causes Spinal Muscular Atrophy (SMA) Type I, the most severe and fatal form of the disorder and has become an inspiration to her family, friends and neighbors.

SMA Type 1 restricts Aleena’s ability to move, swallow or breathe on her own, but this doesn’t stop her from living her life to its very fullest. Despite her full body paralysis she loves to learn, read books, watch Barbie videos, and enjoys her American Girl dolls.

At 14 months old, Josh Cranfill was diagnosed with Werdnig-Hoffman Disease – a form of Spinal Muscular Atrophy. It is a degenerative muscle disease that weakens the muscles in the body until they eventual die out. Poker is unquestionably Cranfill’s favorite hobby, but since the United States Department of Justice shut down online poker in the United States, it’s become extremely difficult for him to play.

Cranfill is confined to an electric wheelchair, limiting his mobility, and lives in Burlington, North Carolina, which is a long way from any brick-and-mortar casino. He can play in home games, but the houses or buildings must be handicap accessible and he needs an assistant to get him there and help him play.

We were fortunate enough to catch up with Cranfill and talk to him about the current state of online poker and how it effects the handicapped community. 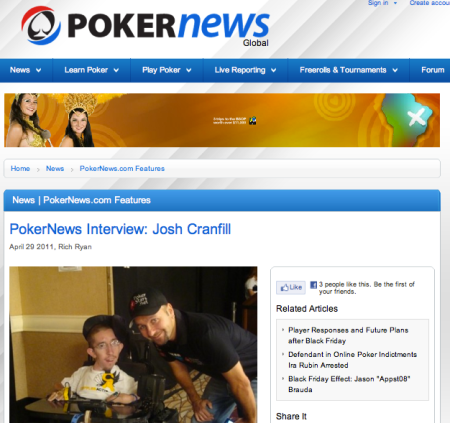