I wouldn’t be shocked if I crashed mail servers last week after I tweeted that I wanted poker players whose futures were affected by “Black Friday” to email their stories to my account. Hundreds answered the call, sharing at length the dire circumstances they face in the wake of the U.S. Department of Justice’s actions against poker industry entities and the subsequent departure of those entities from America’s digital space. People are hurting. A lot.

“You have these tens of thousands of U.S. players and millions of casual players who want to play on occasion and these people have money tied up and are suffering more than [PokerStars, Full Tilt Poker and Ultimate Bet] ever will,” said Michael D, one of the affected. “I don’t know the reasons behind the DOJ’s actions, but it seems like there might be broader ramifications than they considered. They didn’t have the foresight to see how people would be impacted by what they did.”

While the DOJ can’t be faulted for the enforcement on the alleged crimes, many U.S. citizens are now feeling they were lulled into a false sense of security, investing or leaving large sums online because for more than four years, enforcement of the Unlawful Internet Gambling Enforcement Act was minimal. Those sums are now mostly frozen online (PokerStars announced Wednesday they are ready to return player funds), but many have legitimate concerns regarding whether everything will be returned. For some, patience isn’t an affordable luxury. 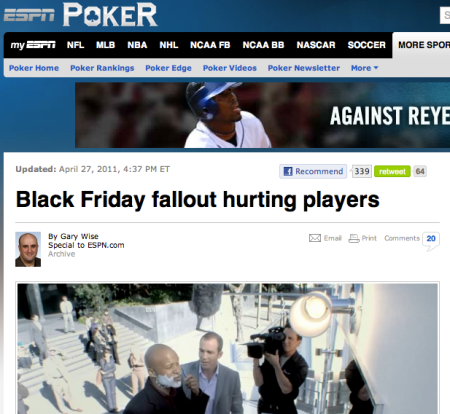 This entry was posted on Friday, April 29th, 2011 at 7:39 AM and is filed under United States. You can follow any responses to this entry through the RSS 2.0 feed. You can leave a response, or trackback from your own site.