JOINT BASE LEWIS-McCHORD, Wash. — Chanel Washington has a lot going on for a high school senior.

She’s on the Youth Council of Lakewood, and involved in Knowledge Bowl, French Club and student government. She was state president of DECA, an organization for students interested in business and marketing, and she loves going to rock concerts.

She’s been accepted to four Ivy League universities. She’s also been in a wheelchair since she was 5 years old.

Chanel has spinal muscular atrophy, an inherited disease that causes muscles to progressively degenerate. Most people with SMA die as children. But Chanel doesn’t let anything hold her back.

“Like I said, (my disease) makes things difficult, but I think even more it pushes me even further,” she said. 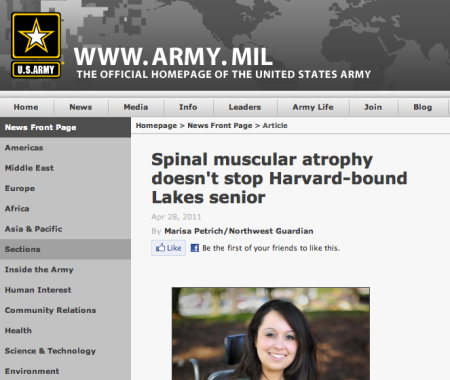 This entry was posted on Friday, April 29th, 2011 at 8:00 AM and is filed under Education, Inspiration, United States, Washington. You can follow any responses to this entry through the RSS 2.0 feed. You can leave a response, or trackback from your own site.